The Maharaji and Maharani of Rajasthan

FYI - This picture is NOT from Jenny's friend's wedding that we attended in India...there is one of her (we got lots of questions on that) 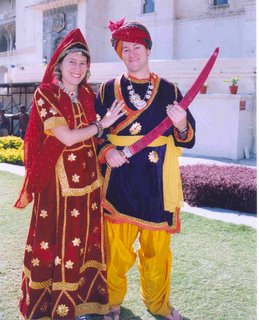 Well, India has been quite an interesting experience so far. We first arrived into Delhi at midnight and after battling the midnight traffic arrive at our hotel. We barely slept as the many odors, bugs and barking dogs kept us on edge. We woke up to find out that our hotel was in the middle of utter chaos. Now remember, Jenny and I live in Union Square...the center of Manhattan and for me to use the word utter chaos means that it was nuts. We get stared at everywhere since tourists are few and far between. I could get over the small crowded streets filled with millions people on bicycles, small motorcycles, scooters, mopeds, auto-rickshaws, bicycle-rickshaws and partridges in pear trees -- all trying to share the same space at the same time. If you look closely at the pictures below, you can see a police officer "directing" the choas. 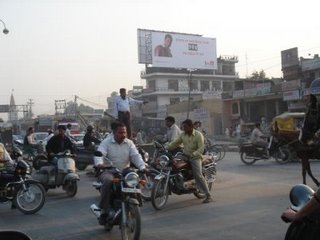 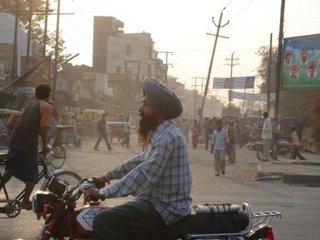 Now, I've been around the world and seen all kinds of bad drivers and terrible traffic....but, I would never even begin to try to drive in India. First, you lean on the horn whenever the car is in gear and second, lanes (and traffic lights for the matter) are suggestions only. Hell, driving on either side of the street is permissable as long as you live to tell about it. For hte record, they "supposedly" drive on the left side of the road, but I only know this since the steering wheel is on the right side of the car. I can't begin to explain this phenomenon, but getting behind the wheel again may be difficult.

However, it was the cows, dogs, garbage and smells that took me a bit by surprise. Many people warned me of what India was going to be like, but there is really a major shock factor that you go through for a few days. Regardless, you have to walk gingerly down any street (if you'd like to call it that) as you dodge cow shit and avoid getting run over by maniac drivers. There's no rules...not of the road and none that says rats belong out of restaraunts. Basically, India made the poor rural parts of South Africa look like Westchester County, New York. After a few days of settling in and getting used to the pollution and garbage laying around everywhere, we finally felt like we could put down our guards. We attended a wedding in the state of Punjab for one of Jenny's friends from college. It was interesting, but it was a standard wedding filled with dancing, drinking, eating and pictures...there even were drunk friends of the groom there to offer slobbering toasts. So, it really wasn't so different...keepah vs turbon...hebrew vs hindi...same thing, different continent. Either way, I couldn't understand what was said. 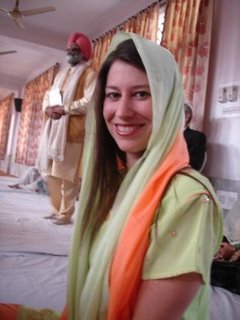 After the wedding, we heading back to Delhi and hired a driver for a few days to take us around the state of Rajasthan (Agra, Jaipur, Pushkar and Udaipur). Each area has rich history filled with forts, monuments, temples (don't forget the cows, pollution and everything on the road moving with wheels). Some were amazing...the Taj Mahal is truly something that can not be described. As much hype as there is, it was worth the trip. Oddly most of the tourists that we've seen are from other parts of India. Jenny was asked on many occasion to pose for a picture with strangers. I guess they want to go home and show their friends that saw a white person...or maybe its because she's beautiful and they want to praise Ganesh. 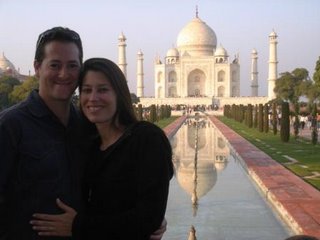 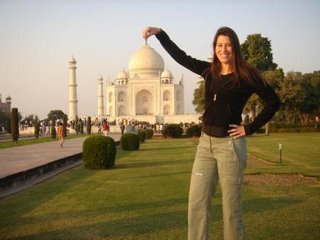 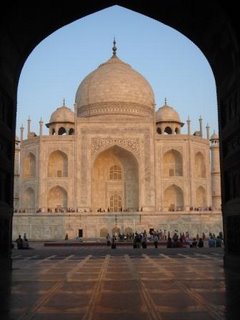 Next, we spent a few days in some small religious town (read: no alcohol or meat) called Pushakar that is on a small lake. Ghandi's ashes were spread there. Essentially, it is now a hippie hangout for Israeli kids that are released from the army. Basically, Israeli kids need an outlet from several years in the army, so they go to India for a few months, years, etc and do lots of drugs...and eat lots of falafal. It was a nice change of pace from all the Indian food we've been eating. Also, Jenny was able to use some of the new Hebrew words she learnt in Israel.

After Pushkar, we went to Udaipur for a few days...another lake town rich in history. Everyone wants to sell us everything in each of these towns. "Only look, no buy" is what you hear as you walk through the winding bazaars. It is kind of like the cartoon Alladin...you have to bargain for everything in India. I even found myself bargaining for the price for a piss. Oddly, most other people just use the street (also known as the Indian Toilet). Me, I bargain for the use of a toilet which is really nothing more than a hole in the ground. Thanks for the pottie training Mom, but you never prepared me for this. The best bargains in town were on perscription medications where EVERYTHING is sold over the counter at rock bottom prices...Propecia anyone? I certainly got mine (Jenny thinks I'm thinning). 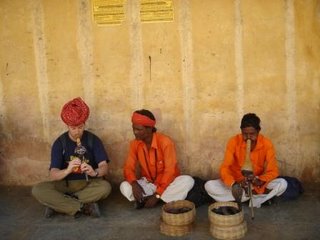 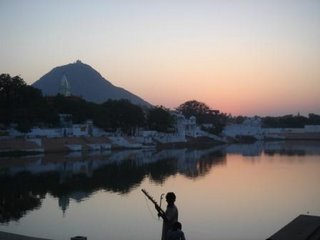 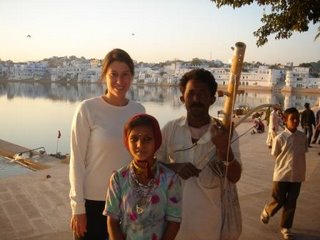 So, now we are in Bombay (aka Mumbai) and have enjoyed walking around the city on something called a sidewalk. This is the first occurance of such a thing in India...no longer are we walking amongst the garbage, cars, bicycles, motorcycles, cows and not to mention the ever popular cow shit pies that litter the streets. It is so much different than Delhi or northern India since people are less religious. There are actually women walking around in tight jeans, but Jenny gets many stares from people as she walks around in short denim skirt (cut above the knees is still too risque). We decided to stay in a nice hotel for once...toilet paper in the bathroom is an added bonus. I won't tell you how people here use the crapper here, but let's just say that they don't use toilet paper and there's a faucet located right next to the hole called a toilet. 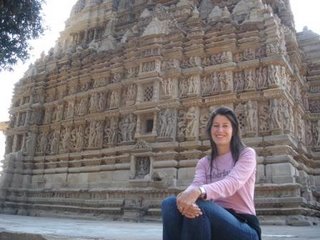 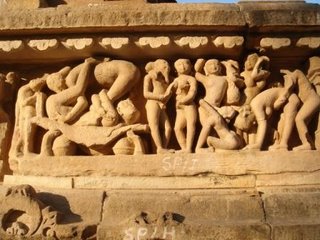 On that note, it's time for me to go, Jenny wants me to watch a DVD with her. Ahh, the beauties of a normal hotel...

Alan you're funny man, sounds like you guys are having a great time. so where you headed next? talk to me on the e-mail.

I am so happy to hear the wonderful experiences you two are having! What an adventure! We miss you!! Please keep the updates and pictures coming!

My name is Mark Warren and i would like to show you my personal experience with Propecia.

I am 61 years old. Have been on Propecia for 6 years now. The drug has definitely slowed hair loss and kept my bald spot from growing much. Much less hair in the bathtub. No side effects - I'm puzzled by the hysterical posts about this. My big gripe is the cost - the price has gone up, not down. And my dermatologist refuses to prescribe proscar, which is the same thing except you have to split the pills.

I have experienced some of these side effects-
None that I can link to propecia specifically.

I hope this information will be useful to others,
Mark Warren