Rice is Nice, But $4 Massages are Better!

Jenny is always making friends...this time with some members of the Long Neck hill tribes in Northern Thailand. 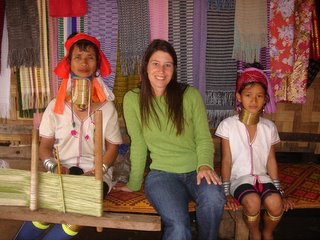 Time to make the rice patties.... 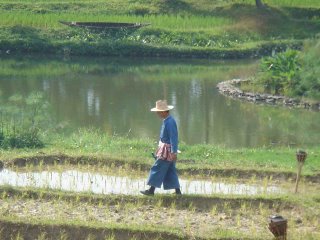 I am demostrating how bad I can make their home made guitar sound...notice a member of the Long Neck community. 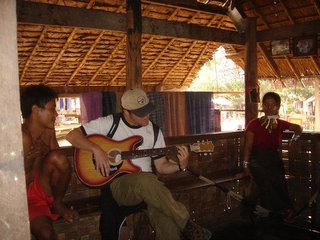 After saying goodbye to India, we boarded a quick 4-hour red-eye destined for Bangkok, Thailand. It was a real nice change of pace (and drastic) from what we experienced for the prior few weeks. The hotel started things off right with a flower petal heart laid in our bed and a fruitcake that read "honeymoon." We've been telling everyone that we're on our honeymoon to get some free stuff (bottles of booze, lots of drawn baths and a few cakes to date). After a quick nap, Jenny and I set out to conquer the country that has really become our favorite stop so far. The people are very friendly and the landscape is absolutely serene. I am officially addicted to the ancient art of Thai Massage...the best $4 one can spend (w/o the happy ending). Also, I have to say that I am in love with the food and can easily eat Thai food for breakfast, lunch and dinner. 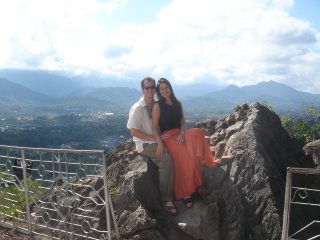 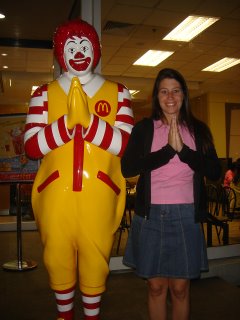 So, beside eating and getting massages, we've spent the past 2 weeks touring Bangkok and the Northern provinces. As one of our more pampering moments, Jenny and I decided long ago to splurge on a few hotels during our trip. One of them was at the Four Seasons in Chaing Mai that is actually up in the hills above the city. I can honestly say that it was one of hte most beautiful hotels that I've ever stayed at. The rooms were very large, private and had balconies overlooking rice fields (why rice fields? Trust me...see it and you will know). 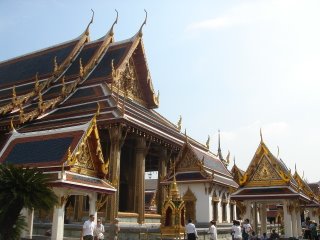 We borrowed some bikes one day and rode around the hills looking for some waterfall. Well, we didn't ever find it, but we managed to find a shooting range. Now, Tommy, Snyder and Corwin all remember my last trip to the shooting range and they vowed never to go with me again. Not that I was a bad shot, but they were worried that I'd go postal (long story and no, I'm not crazy). Well, we had a .22 caliber rifle with a small target placed 37 meters away. I had 25 shots and then Jenny would have her turn. I was excited that I hit the target (12 cm x 12 cm) in all 25 shots with many around the tiny black center. The results were something a man could be proud of. Well, Jenny only hit 23 shots in the target, but she had an overwhelming number in the tiny center...in fact, more than me. I was beaten by a girl, but at least it was her. After, she told me that she was on the rifle team at camp. Well, I wish that camp could have tought her how to ride a bike, because it wasn't pretty. Regardless, we got back the comforts of the hotel just before dark...a good evening riding through the hills. But, I have to admit that I'm pissed that we didn't that waterfall...it still haunts me. 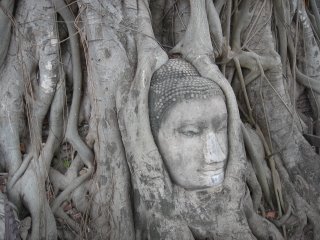 Most people go to Chaing Mai and take day trips to other areas and/or sites, but we had enough time to hire a driver for 5 days to take us around the area. His name was Daecha (means power in Thai) and he was full of corny jokes and showed us some Thai culture. It was a bit rushed since we covered 1,000 kms (p.s. I am now a metric system convert), but we did see some natural beauty including the highest point in Thailand (2,500 meters), caves, springs and what could have been the windiest road I'd ever been on. I think there are something like 1,950 turns between Chaing Mai and Mae Hong Song, but we did much more than that on this trip. If only I had my motorcycle! Ok, that can be reserved for next time (you hear that Lampe?). Actually, I'd really like to come back to Thailand, South Africa (and India if they fix their roads) on a motorcycle since the scenery is amazing and the roads just twist off into the horizon. I may have to wait until the next time I quit my job...or retirement, i suppose. Some go to Florida, others ride through the jungle on a motorcycle.

So, back to our trip. We made a big circle from Chaing Mai heading west and stayed at a little (very) town called Mae Cham in the hills. Next, we went north to Mae Hong Song a touristy area that people fly to and from Chaing Mai. After, Mae Hong Song, we went West and back around near the Four Seasons, 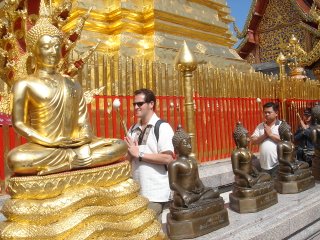 but we headed North toward the Burmese (now Myanmar) border town of Mai Sae. After some border shopping and a quick peek into Myanmar, we headed further west to the Golden Triangle, the point connecting Thailand, Myanmar and Laos (China is only 50 miles away) that was governed by drug lords until recently. Apparently, the opium trade moved to Afghanasthan....we can now see that the American government loves to attack those drug zones! The Golden Triangle is where we first saw the mighty Mekong river, the 10th longest in the world and a waterway that would be our new home for the next few days.

After a day or two on the border, we crossed into 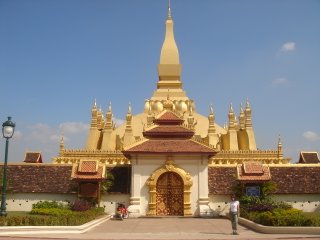 Laos and after some visa control left on a 2 day boat trip to Luang Prabang. It was amazing to see the boat communities on the river and visit some mountain villages that were unaccessible by road. We really enjoyed enjoyed our time on the water and settled into Luang Prabang for Christmas. While Laos isn't as touristy as its Thai neighbor, we hit it right smack in the middle of the holiday season and it was filled with Gringos. We couldn't even get a flight to Vientiene (Lao capital) so we opted for the 10 hour over night bus ride through the mountains. After missing the VIP bus (it left 45 minutes early), we got stuck on the "local bus". 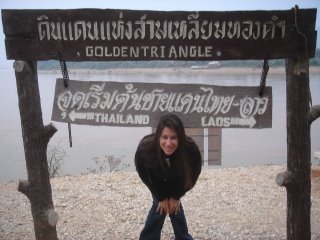 To put things into the imagination, they handed out barf bags when we started our journey...you can never quite get used to the smell. Not to worry, Jenny and I hung tough, but the same couldn't be said by the Lao soldier sitting behind us (he's there for our protection from gorilla tribes stirring trouble in the past), since he had a few " 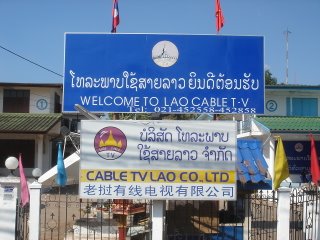 episodes" out the window! Of course, everywhere we go has its nuances, and after some fancy visa footwork (again) dealing with consulates and embassies, we were off to Hanoi, Vietnam. New Years is just around the corner!

Alan
PS - I miss the Thai massages...please, someone find out where Jenny can get lessons!

Alan and Jenny,
your trip sounds awesome. Not much to report from here - except that good ol CCUR is about to breakout...

Have a great rest of your vacation.