Kiwi Crazy - Anything For a Thrill

Check out Flying Jenny!! She has the cutest smile even at 12,000 feet above New Zealand...I landed just in time to see her fall out of the sky. 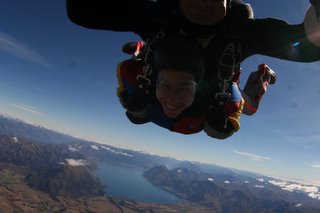 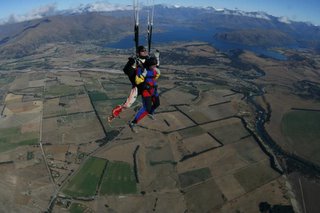 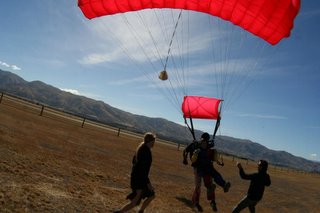 So, now we're in New Zealand and this is certainly the place to do any crazy thing that you always wanted to try. We left the heat and beach of Hayman Island near the Great Barrier Reef a few days ago (the diving in Thailand was better). So far in the few days here, we've taken a train through the mountains, a helicopter ride to the top of a glacier where we hiked around for a few hours (through caves and saw a few avalanches) and have jumped out of a plane. We leave tomorrow for a 4 day hike (33 miles) taking us through some of the most beautiful mountains this side of the world (I'm still a Rocky Mountain fan). This is a great place to wind down our trip!

Jenny caving on top of Franz Josef glacier...man was it cold! 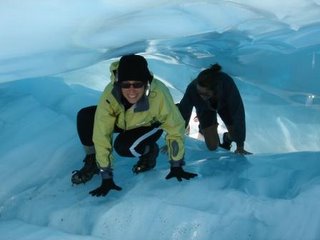 While I find New Zealand a blast, I can't say the same thing for Australia. It was nice, don't get me wrong, but I felt like I was in another part of the United States. The cities were all nice (Sydney, Melbourne, Adelaide, etc), but they could have been transplanted into the states and it would have fit in nicely. We were lucky enough to have a few encounters with some kangaroos which was amazing. I know that many people come back from the land 'down under' and can't stop talking about how amazing it is, but after 3 weeks touring the country I can not say that it has anything on the states. I guess you can say that Australia is simply over-rated! 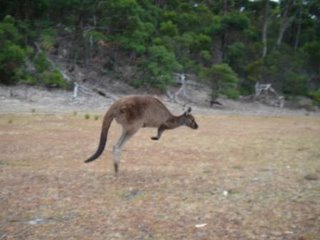 Unfortunately, many people do not take the time and really explore our own country other than Florida or California to escape the cold Northeastern winters. I was lucky to have my parents plan one of those trips that seemed awful back when I was 14. We spent 10 days driving around in a Camaro through the Western states including Colorado, Wyoming, South Dakotah, Utah, Arizona, New Mexico and maybe a few others. I liked it so much, I spent a 6 weeks driving around much of the same area after I graduated college. There are so many natural splendors in the states that blow away Australia. Ayers Rock...Devil's Tower, Wyoming. King;s Canyon...a poor man's Grand Canyon. I will say that they're cities are nicely situated on the coast line and the weather may be a bit better. I can't say that I really blame Rupert Murdoch for moving to the states...I guess it also explains why all Ausies have major travel bugs. 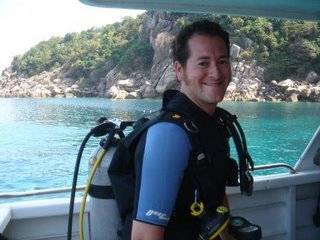 Regardless, we had a great time and can't say that I regret anything from our trip down there. Hayman Island was a really sweet spot and I recommend it for anyone planning a romantic getaway.

Love the skydiving and scuba pics! But Bezoza, I know you're finding your inner Democrat on this journey of yours, and looking at those big 'burns I'm wondering if you've been separated at birth from "Old Kinderhook"??

See ya when you get back!!